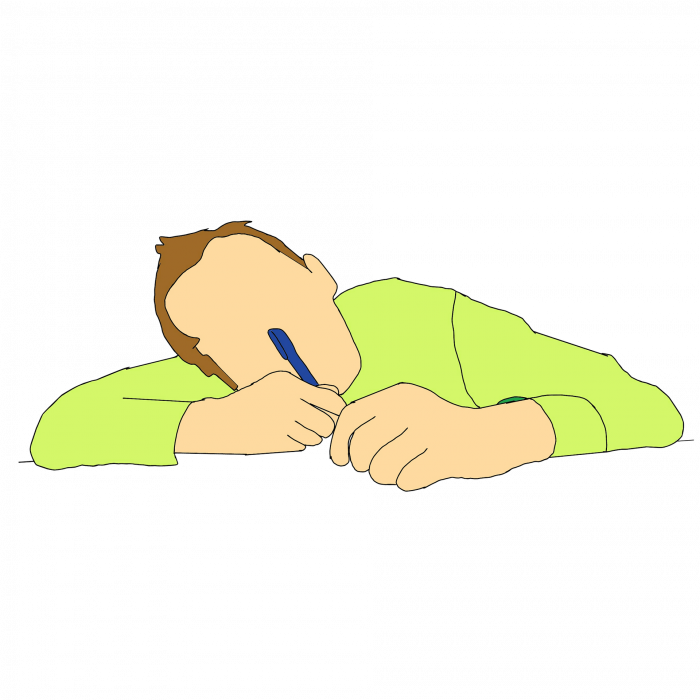 Being productive when you’re tired can be next to impossible.

That’s because, when you’re tired, all the brain functions that you rely on for productivity begin to shut down (more or less).

You can think about it like this: When you’re tired you don’t have enough energy to run every function of your brain. And because your brain has to make sure that it continues to perform all the functions that keep you alive, it makes sure to give its energy to those functions.

Naturally, then, those functions that aren’t necessary for your survival are the ones that end up lacking energy.

So, you’re ability to problem-solve, recall memories, and form coherent thoughts about abstract subjects goes out the window, so to speak.

And your ability to regulate your emotions is diminished as well.

This means that, when you’re tired, it’s literally more difficult for you to do your job. And at the same time, you are less able to guard against distractions.

But that doesn’t mean you can’t be productive when you’re tired.

A Story about Being Tired

I was jolted awake by a blaring noise so loud my ears were instantly ringing.

A dozen thoughts flashed through my head at the same time.

Is that the fire alarm? What time is it? Where am I? Is it morning?

After a few seconds, the cobwebs began to clear and I realized what was going on.

Thankfully, I was in my bed.

But where was that noise coming from? And what did it mean?

I looked around, feeling disoriented but still trying to figure out the source of the noise.

I looked down. And there it was. I had somehow fallen asleep on top of my phone.

I almost always have my phone on vibrate, so I didn’t recognize the ringtone.

And I always have it on the other side of the room at night. But, for some reason it was right by my ear that night, which meant that it sounded like it was loud enough to wake up the neighbors.

By now my wife was awake and telling me to do whatever it would take to make the noise stop.

So I checked the number calling me. I didn’t recognize it.

But I answered anyway, just in case there was some kind of emergency.

“Nope. You got the wrong number,” I tell him (making sure he can tell that I’m clearly annoyed by the situation).

“I’m pretty sure. Unless Don somehow snuck into my room while I was sleeping and gave his phone to me,” I say to him sarcastically.

Then he hung up.

I tried to go back to sleep, but my heart was still racing from being jolted out of my slumber like that.

I began thinking about what I had planned for the next day.

I managed to clear my head and get back to sleep.

But the damage was done.

Related Article: Are You Playing the Right Productivity Game?

The next day I was tired and sluggish. I knew I wouldn’t be able to perform at my best.

Now, we all have days like this from time to time.

Or maybe you lost half your night’s sleep because your flight was delayed.

These are examples of what I call “slumber thieves.”

Slumber thieves are the things that steal your sleep.

They come in all forms, shapes and sizes.

Sometimes, they’re obvious, and other times you just wake up a little off.

I don’t know the form they’ve taken in your life, but I’m positive they’ve been at work.

I know that you’ve had days where you just didn’t have the energy you needed to get through the day.

When You’re Tired, You Have 2 Options

In situations where the slumber thieves have stolen your sleep, you have two and only two options: be strategic or watch your productivity shrivel up.

Proper rest is so important for productivity that, if you don’t take these slumber thieves seriously, they can permanently derail your productivity.

Now, most of us in these situations take an all-or-nothing approach. Either we grit our teeth and tell ourselves that we’re determined to power through the day as if everything were normal. Or we give ourselves a pass—a day to laze around and put off to tomorrow what we had planned for today.

But both of these approaches are dangerous.

When you grit your teeth and power through, you’ll almost certainly fail. Your to-do list is a powerful adversary. If you’re not prepared, you’ll lose the battle against it.

And if you do somehow manage to get everything done you wanted to do that day, you’ll find that you’re exhausted again tomorrow.

Thus starts a cycle where every day you have to force yourself to fight your lack of energy and get everything done that’s on your to-do list.

And, when you get to that point, failure is nearly inevitable.

Related Article: How to Stop Being Overwhelmed by Everything You Have to Do

The Right Way to Stay Productive when You’re Tired

The right approach is simply to reduce the number of tasks on your to-do list.

Identify the three most important things you have planned for the day, and pour all your focus and energy into them.

Forget about the rest.

That will allow you to stay productive when you’re tired.

You’ll make progress, feel good about your day, and also get some much-needed rest so you can wake up tomorrow and be right back on track.