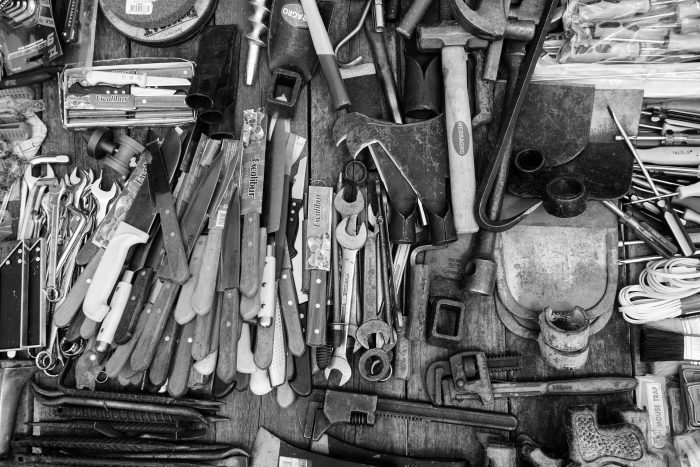 I don’t know about you, but I’m constantly tempted to try new productivity tools. Whether it’s a new app or calendar, or an entirely new productivity “system,” there’s always some new flashy product trying to get my attention.

And with the seemingly endless selection of productivity tools, how can you know where to start?

While the answer to this question will be different for each person, there is a very simple rule that’s helpful to keep in mind when choosing which productivity tools you will use.

I ran out to grab a few items from our local health food store the other day.

It’s a small little shop tucked right in between a McDonald’s on one side and a Burger King on the other.

I’ve been the the store dozens of times, but I still have trouble finding the turn every time.

As I approached the store, I started thinking about how flashy the McDonald’s and Burger King signs were. That’s probably why the driveway was so difficult to find, I reasoned to myself. The bright signs and pictures of juicy, photoshopped burgers were too distracting.

And so I began to wonder why this little health food store didn’t put up a bright sign of their own.

It wouldn’t have to be fancy. Just something to help regulars like me turn in at the right place.

Just a plain old arrow would do the trick.

Of course, just as I was thinking about how much easier it would have been to find the store if it had a sign, I realized that I missed my turn.

Case in point, I suppose.

There’s an important lesson hidden in this simple story.

And the lesson is this: The right way to do something is almost never the flashy way.

The fast-food signs were huge and bright.

But the health food store signs were not even visible from the road.

If I didn’t already know where the store was, there’s no way I would have found it.

A bright, flashy light would have been expensive, and it would have taken a lot of time and effort to install.

Related Article: Are You Making the Biggest Productivity Mistake?

There are all kinds of flashy gurus out there talking about how easy it is to quit your job and make a boatload of money working 2 hours a week.

There are all kinds of flashy productivity “systems” out there that promise to rain anything you want down from the sky.

But, here’s a good rule of thumb to follow when it comes to the productivity tools you use: If it’s too flashy, it’s probably not worth it.

You see, the most productive people all know that true productivity isn’t flashy.

True productivity is about putting foundational principles and strategies in place, identifying a few key habits and tactics, and then showing up consistently. Every. Single. Day.

When you do it right, it doesn’t have to be hard.

But you can bet it won’t be flashy.

It can be tricky to pick out the functional amid all the flash.

But when you’re committed to focusing on functionality over flash, it’s like pulling into the health food store instead of the fast food joint.

In the long run, it’s the much, much healthier choice.